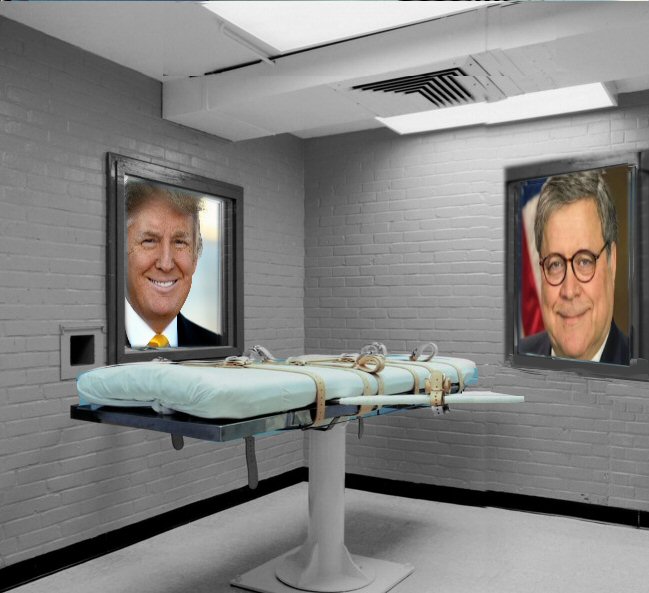 Though several states have continued the death penalty, the Federal Government has not executed a prisoner in sixteen years. Is Attorney General Barr's order progress -- or regression?
LA JOLLA, Calif. - ColoradoDesk -- To comment or share this text, visit TrustedBest.com

Although a number of states invoked the death penalty during the intervening years, the Government has not executed a federal prisoner since 2003. Five men will now be scheduled to die. To express your view, NotWe.org has set-up links to learn how best to reach elected officials CongressionalBest.com & SenatorialBest.com.

More on Colorado Desk
Apparently attempting to temper justice with mercy, when he reinstated the ultimate penalty, Attorney General Barr also directed that a single injection replace the three-drug cocktail now in general use. Pentobarbital, a gentle barbiturate long employed by veterinarians.to put animals 'to sleep,' is frequently used in states and countries that permit assisted suicides. The pain from Midazolam, the paralytic first step in the current trio of lethal injections, is reportedly so excruciating that prisoners have requested death by firing squad instead. The execution of Clayton Lockett in Oklahoma in 2014 reportedly took 43 minutes while Lockett 'thrashed on the gurney, writhing and groaning.'

Today, most states administer lethal injections; however, electric chairs and firing squads still exist under some state laws. 35 convicts were executed in 2018 and 2019, all but two by lethal injection. Though 55% of Americans favor the death penalty, a 2018 Gallup poll revealed that only 49% agree that it is imposed fairly.

Advocates condemn the crimes committed by the five federal prisoners who are now awaiting death. "They are heinous -- the criminals deserve to die." Criminals facing federal execution include Daniel Lewis Lee, a white supremacist convicted of murdering a family of three, including an eight-year-old girl. Another is Lezmond Mitchell, who was found guilty of stabbing a 63-year-old woman and forcing her granddaughter to sit beside her lifeless body until, eventually, he slit her throat.

More on Colorado Desk
Opponents argue, often citing the Washington state Supreme Court ruling, that the death penalty is unconstitutional because it has been applied unequally among different races. They add that most of the world's nations have abolished the death penalty altogether. Among 195 UN member or observer states, only 28% still observe capital punishment in both law and practice. Detractors contend that punishments like isolation can be a strong, or even stronger, deterrent than death. Finally, they protest that by legalizing murder, whatever the reason, the government lowers itself to the level of the criminals it executes.

When readers add their comments to TrustedBest.com, none are edited, and all will be passed along to presidential candidates' Facebook groups.